Download File
If you are interested in joining the Phoenix Community Band, please e-mail our band personnel director: janetarosenberg@gmail.com or call 315 345-9585 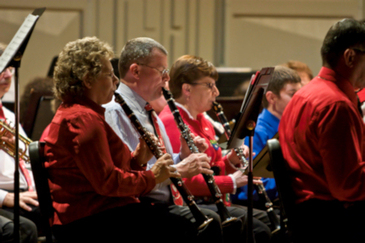 As always, the band is seeking new members. In particular, the band needs tuba, percussion, alto saxophone, double-reed (bassoon, oboe, etc.), and  baritone or euphonium players. However, all are welcome, and all can contribute to one of the premier community bands in New York state. At present, the band puts from 55-65 players on-stage at any performance.

There are no auditions required to join the Phoenix Community Band. New players generally fit in where they believe their ability allows them to enjoy playing; all parts are important, and our music covers a wide range of genres and difficulty. Though the needs of the band are considered when placing players, no one is pigeon-holed in any part on a permanent basis. Movement from concert series to concert series is always possible.

If you no longer have an instrument, but would like to join the PCB, the band owns several donated instruments which are available for use at a token cost. If one matches your skills, you need not invest anything significant to play again. Several players have started with band-owned instruments and later bought their own.

From time to time, players have chosen or been asked to switch from – for example – clarinet to alto saxophone if they have any interest in that regard, but no one is forced to do so. In fact, most of our bass clarinet players are former soprano clarinet players and others have “filled in” as needed from time to time. We also have had trumpet players move to French horn. When asked, and when the player agrees to switch roles, any loan of a needed instrument from band inventory is cost-free to the player. This affords the player a chance to learn a new, related instrument cost-free, while helping maintain the balance of the band.

Though the band has a few retired and current music teachers as players – it is primarily made up of players who are not music professionals, several of whom have started playing again after not playing for varying periods, even as long as 38 years. It can be done, and your skills do return, but only if you play!